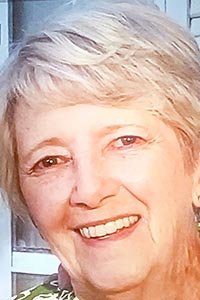 Pamela Kay Newton White was born March 20, 1941 and was adopted by William Asbury Newton and Lois Mitchell Newton. She was raised in Waco, Texas and graduated from Waco High School in 1959 where she formed lifetime friendships, especially her YaYas.
Pam attended Baylor University and was a member of the Alpha Omega Sorority. While attending Baylor she met her husband, H.G. “Buddy” White. Pam and Buddy had two daughters and made their home in Eldorado, Texas in 1966.
While living in Eldorado she became involved in many civic organizations, including the Schleicher County Hospital Board, Schleicher County Library Board, Child Welfare Board, and the First Baptist Church. Pam most loved being a wife and mother, but also enjoyed substitute teaching in the Eldorado Schools. Pam fondly spoke of her “baby’s” who touched her life in so many ways.
Pam also had a deep love of her West Texas roots in Marfa,Texas and her time spent as a child and adult at Paisano Baptist Encampment.
Pam is preceded in death by her grandparents, C.T. and Mamie Mitchell, her parents, William Asbury Newton and Lois Mitchell Newton Thompson, step-father Rex Monroe Thompson, special cousin, Mary Barton Robinson as well as many beloved aunts, uncles and cousins.
Pam is survived by her daughters, Mary Kay White and Missy White Sims and husband Elijah Wayne Sims, and her granddaughters, Lauren Eliza Sims and Shelby Katherine Sims, as well as so many beloved family and friends.
Mary Kay and Missy would like to extend our gratitude to the staff at Schleicher County Hospital for their exemplary care of our mother. Each of you are angels on earth.
In lieu of flowers, the family requests that memorials be made to Paisano Baptist Encampment, Schleicher County Library, Schleicher County Child Welfare Board, or the charity of your choice.
We will have a Celebration of Life in honor of Pammy on Saturday, January 7th at 11:00 am at the First Baptist Church of Eldorado.