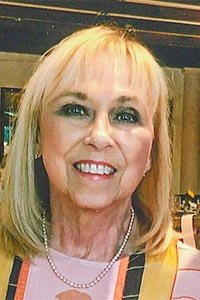 Kim Green Freeman of Shawnee, Oklahoma went to be with the Lord on October 21, 2022. Kim was born on October 9, 1952, in Tribune, Kansas to Warren and Emmeline Green. She grew up in Leoti, Kansas, graduating from Wichita County High School in Leoti in 1970. Kim graduated from her cherished alma mater, Kansas State University, in 1974, where she was a member of the Pi Beta Phi sorority and Light Brigade. Kim was a registered dietician and thereafter transitioned to a career in rural hospital administration.

Kim served as the administrator of Wichita County Hospital and eventually assumed the position of administrator of Seminole Municipal Hospital in Seminole, Oklahoma. During her tenure in Seminole, Kim met the love of her life, Donald “Andy” Freeman, and they married on January 4, 1986. Kim and Andy settled on the Freeman family ranch in Sasakwa, Oklahoma, where they welcomed two daughters, Hadley and Kinsey. In 1989, Kim and Andy relocated to Shawnee, Oklahoma to operate Preferred Management Corporation, which they founded with their dear friends, Jerry and Sharon Hulin. In Shawnee, Kim was a member of the United Presbyterian Church, P.E.O. Chapter BB Shawnee, and The Hawthorn Club and served on the board of the Pioneer Library System and the Shawnee Public Library. Kim was also a member of The Daughters of the American Revolution (DAR) and believed in contributing to various charities supporting the promotion of communal welfare.

Kim had many talents and hobbies, which included cooking and baking for friends and family, working, reading, learning, and watching K-State football and basketball. She was a lifelong proponent of education and literacy and had an extensive interest in the arts. Kim will be remembered for her giving and selfless nature and her devotion to her faith, family, friends, and Preferred Management Corporation.

Kim was preceded in death by her parents, Warren and Emmeline Green and brother, Kelly Green.

In lieu of flowers, donations may be made to the Salvation Army of Shawnee, OK, the Pioneer Library System Foundation, and/or Family Promise of Shawnee.