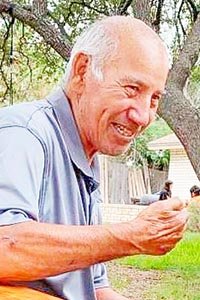 Fidencio Ramirez of Sonora, Texas, passed away peacefully at home in the arms of his wife on Sunday, August 21, 2022. He was born September 8, 1947, in Rankin, Texas.

Fidencio is survived by his wife, Susie of 53 years who was the love of his life and often referred to her as his one and only. Their love is iconic and a true representation that soulmates do exist. He is survived by their four children, Jennifer Jasiczek (Jaz) of San Antonio, Texas; Juan Ramirez of Addison, Texas; Christie Walsh (Charles) of Bradenton, Florida; and Michael Ramirez (April) of Sonora, Texas; 15 grandchildren whom he loved dearly, and one great grandson. He was known as a kind, generous and supportive father and grandfather who provided unwavering support in the success of his family. He was the best Welo ever!

Fidencio was truly a self-made person who worked in the oil and gas industry. At the age of 15, he dropped out of high school to work full time and help his father provide for the family. During this period, he began a hobby of amateur rodeo that led him to become an award-winning bull rider. About the age of 20, he began working in the oil field as a floor hand and demonstrated an ability to learn and lead. He quickly rose through the ranks and became Field Manager of Operations for Windsor Gas Corporation where he met his good friend and future business partner Don Henkel. Together, they worked side by side for over 20 years drilling natural tas wells all-over West Texas. His career spanned 51 years and was best known for the ability to troubleshoot the most complicated issues in the industry.

After retirement, he and his wife Susie enjoyed traveling and spending time with their grandchildren. He was known as the most hard working and caring man who loved his God and family. Not far behind was his love of the Texas Longhorns, rain or shine he would not miss a game or a chance to yell TEXAS FIGHT!

Fidencio leaves behind a legacy of Service to Others, Faith in God, Love of Family, and Believer of Hard Work. Proof of a life well lived.

Visitation was Thursday, August 25, 2022, followed by a Rosary at Sunset Memorial Funeral Home in Odessa.