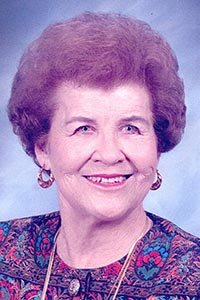 Mary Francis (Mankin) Andrews, 94, of San Angelo went to be with her heavenly father on Monday, May 3, 2021 at Shannon Medical Center in San Angelo.

Born in Jones County, Texas on June 1, 1926 to William Thomas and Myrtle (Rushing) Mankin, Mary graduated from Anson High School in 1944 and graduated Drauhons Business School in Abilene, Texas. On December 17, 1948 Mary married the love of her life, James William Andrews at Truby Baptist Church. Mary worked as a bookkeeper at Wilson Wholesale, H.O. Wooten Wholesale Grocery and at San Angelo ISD for 13 years. Mary was a devoted housewife and mother to her two children and a helpmate to James in his service as a full-time minister. After James retired, he and Mary led the Fellowship Sunday School Class at Glen Meadows Baptist Church for many years. Mary devoted her life to James and the Lord as He called them to pastor several churches in West Texas; Hobbs, New Mexico; Mobile, Alabama; and New Deal, Texas.

Special thanks given to caregiver Nancy Rychlik and the staff at Shannon Medical Center.

Memorials may be made to Glen Meadows Baptist Church for Foreign Missions or Meals for the Elderly of San Angelo.

An open visitation will be from 5:00 PM to 7:00 PM on Thursday, May 6th at Harper Funeral Home. The graveside service will be Friday, May 7th at 10:00 AM at Lawnhaven Memorial Gardens.