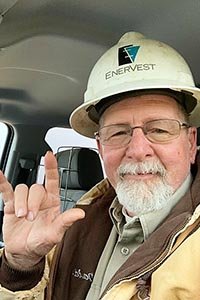 John David Meador, 66, went to be with his Lord and Savior on July 13, 2022 after a courageous two year battle with glioblastoma multilforme. John David was born July 10, 1956 in San Angelo, Texas to Sandra Nixon Ackley and John Edward Meador.

He attended schools for the deaf in Cave Springs, Georgia, Casper, Wyoming and the Texas School for the Deaf in Austin, Texas. At TSD he was involved in football, basketball and track. After his graduation from high school, he attended Lee College in Baytown, Texas where he received his welding certification. He returned to West Texas working in San Angelo, Midland, Eldorado and Sonora.

He came back home to Eldorado in 1982 where he worked for nearly 30 years for John E. Meador Construction as a contract pumper. He then took a job for Highmount/EnerVest in Sonora.

He first met his wife Sheryl while attending TSD in Austin. Their paths crossed again 20 years later, and they were married on May 31, 1997 on the Riverwalk in San Antonio.
When he wasn’t spending time with his family, he could be found hunting on his deer lease, or cheering on the Dallas Cowboys and the Texas Tech Red Raiders. If you knew John, you couldn’t help but know how much he loved all of his pets including he new puppy Izzy.

The family would like to extend a special thank you to John’s cousin, Forrest Meador, and Karen Robertson who were a tremendous help to John and Sheryl throughout his illness. We would also like to thank Dr Raj Cheruku and the staff at Shannon Oncology and the Kindred Hospice nursing staff for their excellent care.

Visitation will be Sunday and Monday from 9:00 a.m. to 9:00 p.m. at Love Funeral Home in Eldorado. Funeral service will be held Tuesday, July 19, 2022 at 2:00 p.m. at Community Baptist Church in Eldorado. A graveside service to follow at the Eldorado Cemetery.

Online Condolences may be made at lovefuneralhome.net