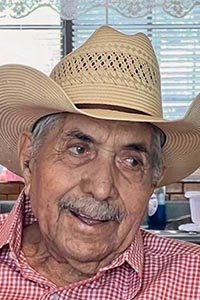 Enrique P. Robles passed away surrounded by family Wednesday, December 28, 2022, at the Schleicher County Nursing Home. He was 91. Funeral services will be held Friday, December 30, 2022 at 11:00 a.m. at the First Baptist Church of Eldorado. Interment will follow in Eldorado Cemetery.
Born July 19, 1931, in Allende, Coahuila, Mexico, to Reymundo and Margarita (Perales) Robles, Enrique was the fifth of eight children. He married Ana Maria “Anita” Silva on September 6, 1952, in Ejido Cristales, Coahuila. In 1969, with the help of his rancher employer, Enrique secured green cards for Anita and the growing family, and they relocated from Ciudad Acuña, Mexico, to Big Lake, Texas. In 1972, they settled in Eldorado where Enrique lived the rest of his life. He and Anita were married 66 years and had ten children. Anita passed away in June 2019.
Except for a few years when he worked in oil field services, Enrique was a lifelong cowboy and ranch hand. He was known for his tireless work ethic, his toughness, and his extensive knowledge of ranching and farming. He and his wife and family were members of Templo Getsemani Assembly of God church.
Along with his wife, Enrique was an avid gardener and home improvement DIYer. He delighted in creating a comfortable home for his immediate and extended family.
Enrique is survived by his and Anita’s nine children: Homero (and Margie) Robles of Lubbock; Areli (and Juan) Montalvo, Esequiel (and Betty) Robles, and Alfredo Robles of Eldorado; Mari (and John) Martinez of San Marcos; Mario (and Rosa) Robles of San Angelo; Angelica Robles and Ana (and Martin) Herrera of Dallas; and Henry Robles of Los Angeles, California. A tenth child, Javier, passed away in 1979. He is also survived by 21 grandchildren, 40 great-grandchildren and two great-great-grandchildren.