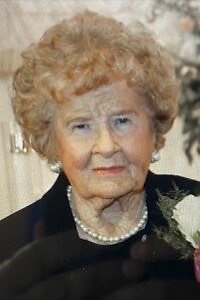 Bertha Johanna Sauer Lux
-
Bertha Johanna Sauer Lux was born July 23, 1923 in Blanco, Texas, the 10th of 12 children to Louise Baethge Sauer and Otto Sauer. In 1928 her parents, Louise and Otto Sauer, moved their family to Eldorado, Texas where Otto farmed and ranched to provide for his family. Bertha learned quickly as a young girl how to sew, garden, can fruits and vegetables, and helped her mother with her younger siblings and doing chores around the house.

Bertha graduated from Eldorado High School and furthered her education by enrolling in Austin Business College in Austin, Texas. When Bertha was 19 she met the love of her life, W.V. Lux, at a barbeque. They later married August 24, 1942. Lux was enlisted in the U.S. Army Air Corps, and as a young married couple they spent time in Dalhart, Texas and Dodge City, Kansas where Lux was stationed. In September 1945 Lux was honorably discharged as a Master Sergeant from the Army, and the young couple moved to Eldorado, where he began to farm and ranch, and where they watched their family grow.

Bertha spent her days raising her children, working in her vegetable garden, canning or freezing her abundant produce, and happily sharing it with friends and family. Bertha is probably best known around the community for her Swedish Tea-Ring, a decadent yeast bread filled with butter, cinnamon, sugar, nuts and raisins. It was loved and enjoyed by her friends and family and a definite favorite of her children, grandchildren and great grandchildren. Bertha truly expressed her love by sharing and cooking for those she dearly loved.

Bertha was widowed at the early age of 51, when Lux died after a four year battle with cancer. Knowing she had a daughter in college and a son in high school, she knew supporting them was now her sole responsibility. Bertha relied on her strong faith to guide her through challenging times, a faith that gave her the strength she needed to move forward. She continued ranching and was a rancher in every way. She mended fences, fed cattle, checked on her livestock daily and wasn’t afraid of helping a young heifer deliver a calf.

After retiring from ranching she kept herself busy in her garden and sharing her produce with her family and friends. Later in life Bertha joined a local ladies quilting club that met weekly. She cherished the new friendships that flourished, the beautiful quilts they made and the entertaining stories they shared weekly.

Please join us in the Celebration of Life for Bertha, July 24, 2021, 1:30 pm at the Presbyterian Church in Eldorado, Texas.